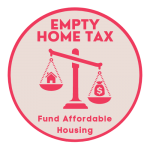 Notice of Intent to Circulate, Title and Summary

NOTICE OF INTENT TO CIRCULATE PETITION

Notice is hereby given by the persons whose names appear hereon of their intention to circulate a petition within the City of Santa Cruz for the purpose of enacting a parcel tax levied on vacant parcels to fund the creation of permanently affordable housing within the City. A statement of the reasons of the proposed action as contemplated in the petition is as follows:

Santa Cruz is categorized as one of the least affordable small cities in the world. The climate, natural beauty, world-class university, and proximity to Silicon Valley also make it one of the most desirable places to live. This high desirability and lack of wage growth for the overwhelming majority of workers in Santa Cruz has led to a housing affordability crisis. Over 70% of renters in Santa Cruz are rent burdened, paying in most cases well over a third of their income to housing costs. This housing insecurity means renters face extreme rates of overcrowding, forced moves, rent hikes, evictions and substandard housing conditions.  This has cascading effects on our local community and economy, including hollowing out neighborhoods, and resulting in many workers having to move to outlying communities or even becoming homeless. This displacement disproportionately affects people of color, increases traffic congestion, reduces air quality, increases the burden on social services and degrades the quality of life for remaining residents.

The City Attorney has prepared the following title and summary of the chief purpose and point of the proposed measure:

AN INITIATIVE MEASURE PROPOSING AN ORDINANCE ADDING CHAPTER 3.38 TO THE SANTA CRUZ MUNICIPAL CODE TO ESTABLISH AN EMPTY HOMES TAX, A PARCEL TAX ON VACANT RESIDENTIAL PROPERTY IN THE CITY OF SANTA CRUZ.

If approved by the voters, this initiative would add Chapter 3.38 to the Santa Cruz Municipal Code, establishing a tax on residential parcels that are in use less than 120 days within a calendar year (“vacant parcels”). This would be a special tax, i.e., the City could use the revenue only for purposes specified in the measure. The tax would apply to various types of vacant properties, including single-family and multi-family residential parcels, condominiums, and townhomes.

The measure would require each owner of a residential parcel to submit an annual declaration to the City regarding the vacancy status of their property.  The City would also be required to establish a process to annually audit properties declared “in use” to verify vacancy status. Making a false declaration as to a property’s vacancy status would constitute a misdemeanor. Other violations of proposed Chapter 3.38 would be charged as infractions for the first two violations in a one-year period, and misdemeanors for three or more violations in the same time period.

The following annual tax rates would be established, subject to an annual CPI adjustment:

An owner would be permitted to claim an exemption from the tax in a number of enumerated circumstances, including demonstrable hardship, as defined, where the owner has experienced a significant medical event, construction activities are active or pending, where the property is affected by natural disaster, and other circumstances as specified.

The use of tax revenue would be restricted to specified purposes, including financing affordable housing construction, purchasing existing units for the purpose of maintaining or converting them to affordable housing, providing restroom and hygiene services to the homeless, and paying the costs of administering the tax and for independent audits of the use of tax revenues.

An Empty Home Tax Oversight Committee would be established to oversee the administration of the tax and to make recommendations to the City Council for improvement of zoning and land use designations in the interest of creating affordable housing. The Committee would have up to nine members, including three members who must be renters, two low-income individuals, two with financial expertise, one UCSC student, and one unionized city employee. The measure would require the City Manager or designee to provide clerical assistance, administrative support and technical assistance, and to attend Committee meetings.

This measure would authorize the City to adopt rules and regulations for implementation and administration of the tax. A simple majority of voters is required to pass the measure.